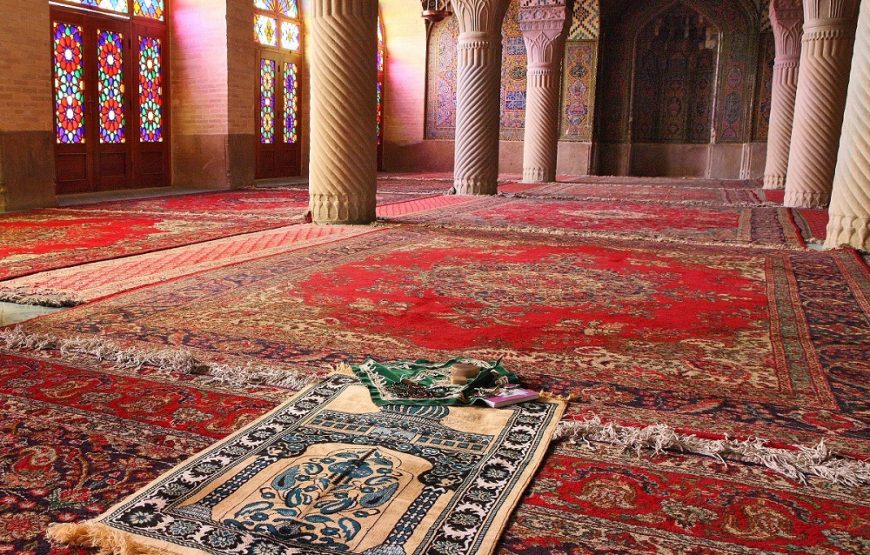 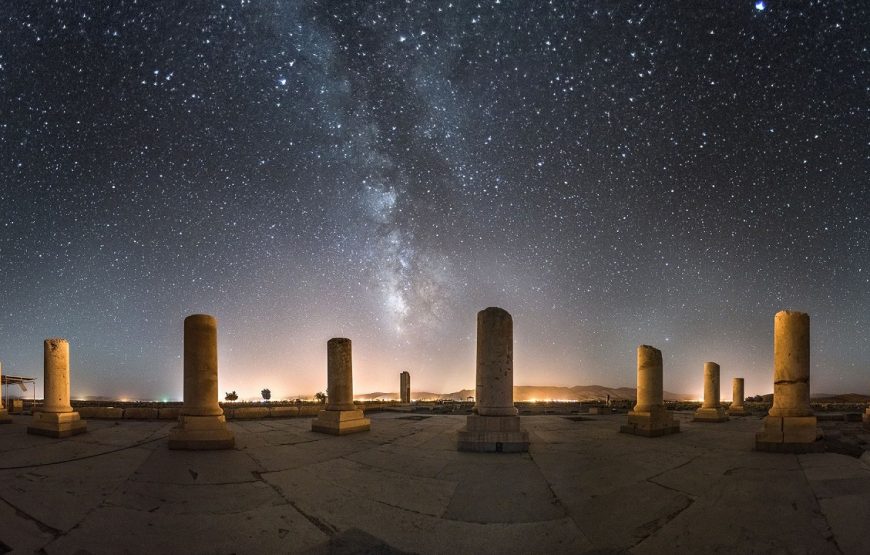 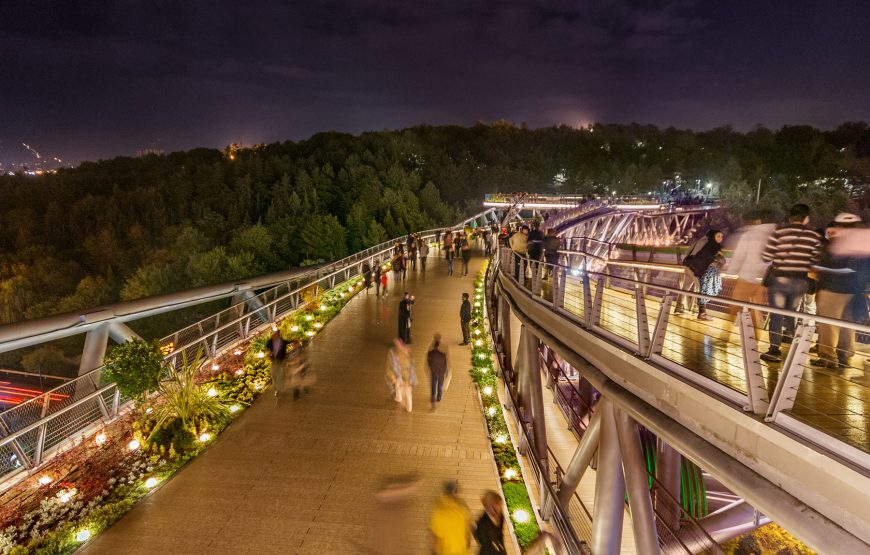 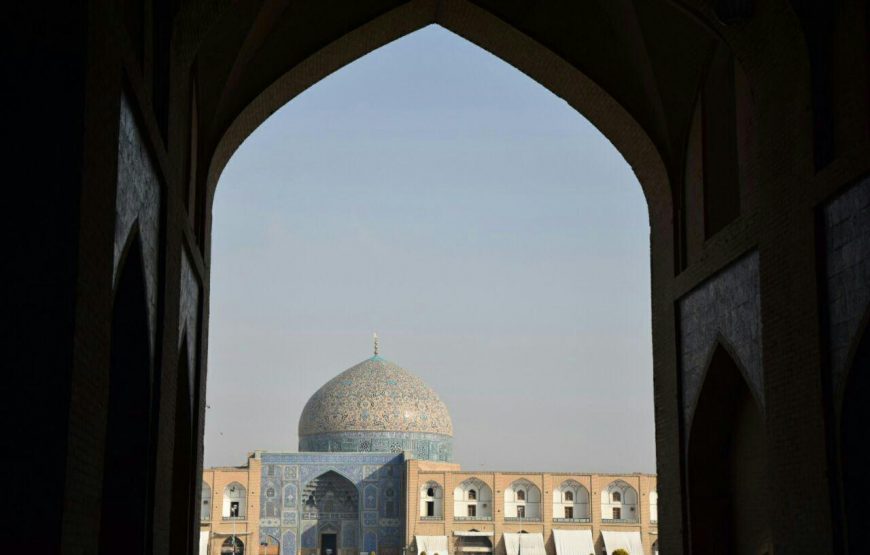 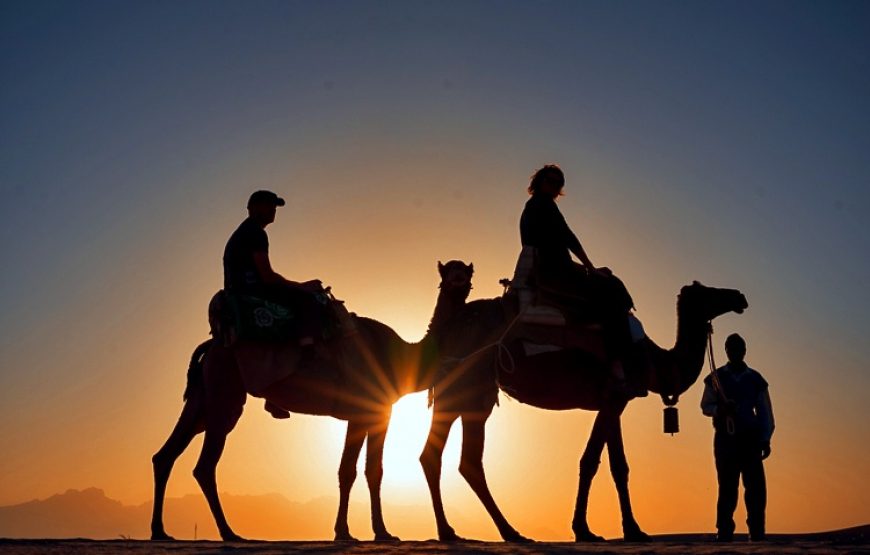 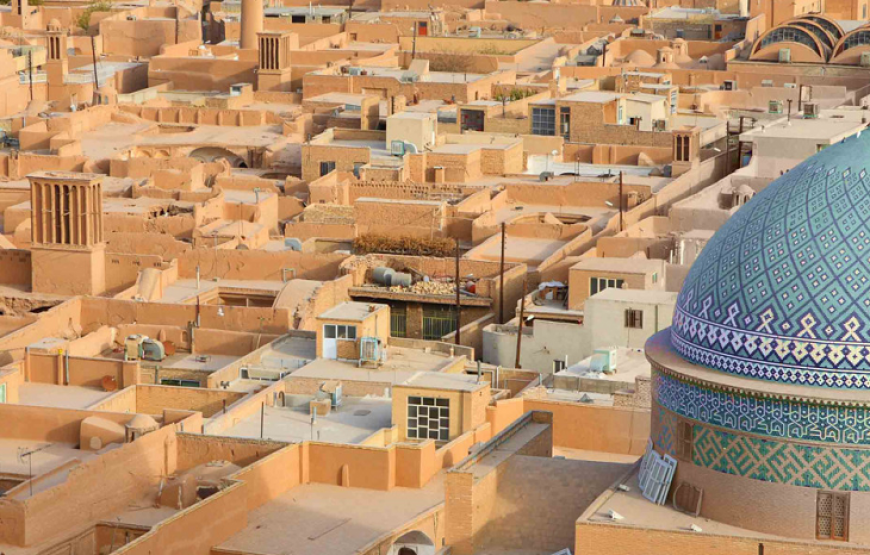 In two weeks it’s possible to see the jewels of Iran’s rich history, but you’ll need to keep moving.

Start in Tehran and spend two days seeing the sights, including the Golestan Palace, the Treasury of National Jewels and Grand Bazaar.

Drive to Kashan, where you can explore the bazaar, check out the Qajar-era traditional houses and chill out in the Fin Garden.

Make a pit stop at the mosque and tomb in Natanz en route to architecturally magnificent Isfahan and spend three days exploring the blue-tiled mosques of Naqsh-e Jahan (Imam) Square, the bustling Bazar-e Bozorg, the sublime bridges across the Zayandeh River and the Armenian community at Jolfa.

Head to the desert trading city of Yazd for three days wandering the maze of lanes, gaping at the Masjed-e Jameh (Jameh Mosque) and climbing to the Zoroastrian Towers of Silence.

For a change of pace, stop in the desert village of Fahraj before spending a day visiting ancient Pasargadae and Persepolis on the way to Shiraz.

Spend two days in Shiraz, where you can see the Zand-era gardens and bazaar, and wander the old city.

Fly back to Tehran. 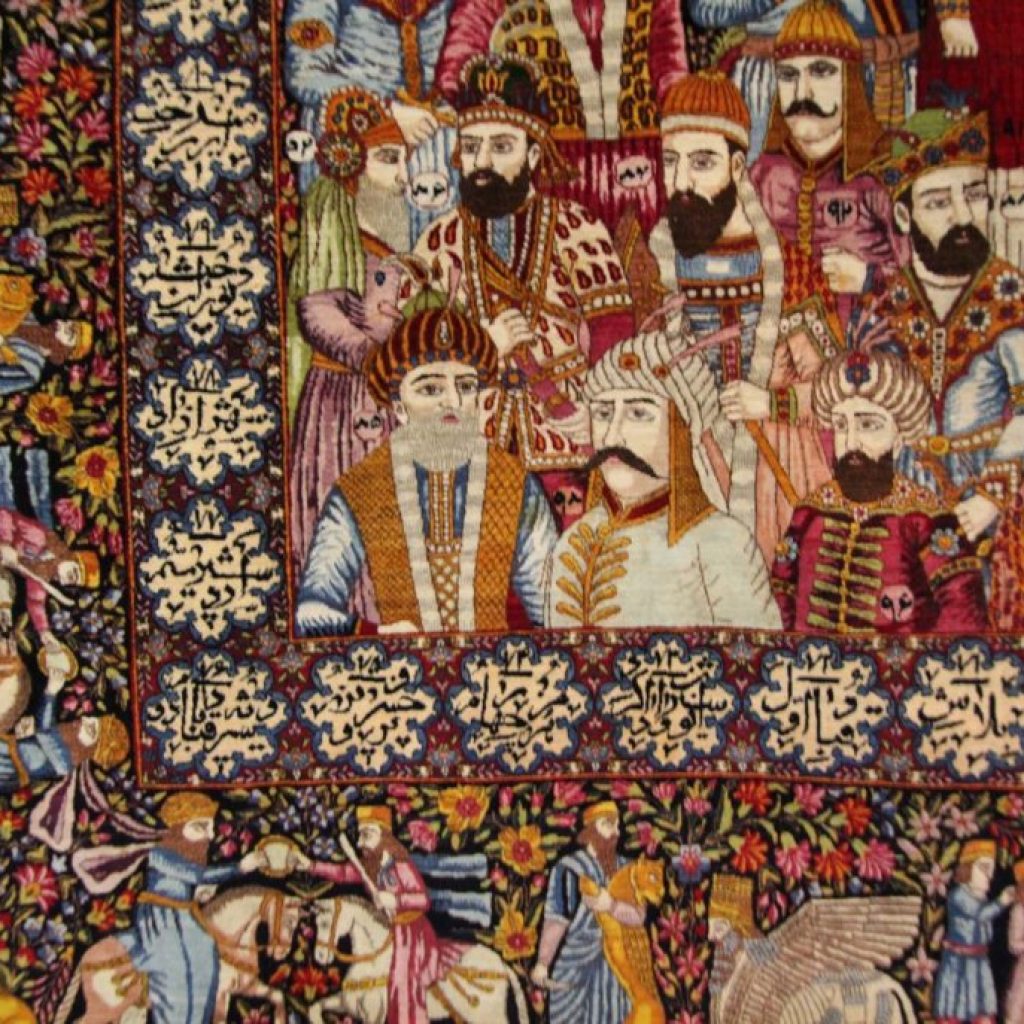 Arriving to the capital of Iran, Tehran, this locates in the center of land of Persia. Tehran has been Iran capital after the Qajar Era. In this dynasty Tehran has been developed and Qajar Kings have built so many Gardens-Palaces and also museums there.

Arrival in Tehran and we’ll start our tour with the welcoming of FriendlyIran Agents. Transfer to Hotel, then based on arrival time we’ll visit the Historical-Time Tunnel at the National Museum of Iran, there you can have an aspect of Iran’s history within the time. There are objects from thousands of years ago up to now. After that, we’ll visit the National Jewelry Museum, a small treasury of precious jewels, or objects designed with jewels and diamonds.

In the afternoon we’ll see Carpet museum and Azadi tower, the symbol of freedom in Tehran. 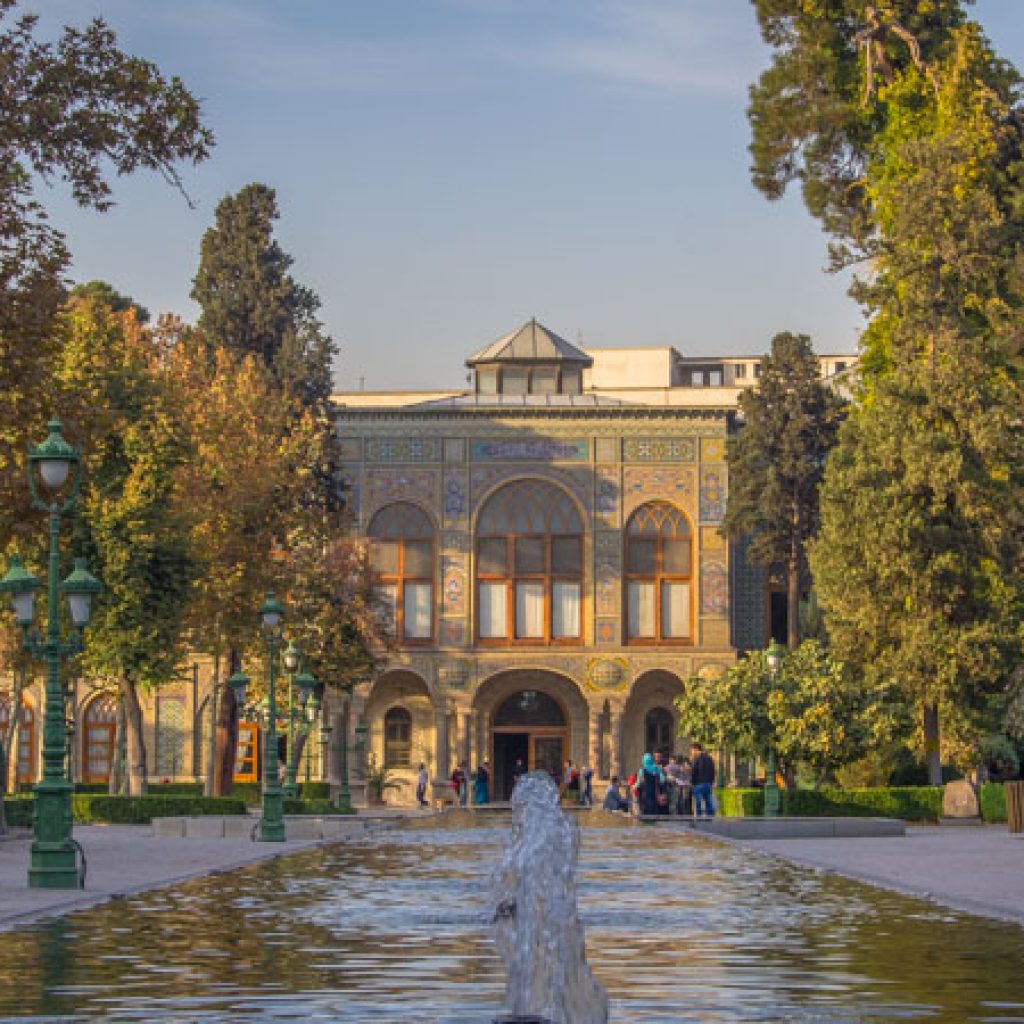 Breakfast then we’ll go to Golestan Palace-Garden, the Shamsol Emareh palace. Shamsol Emareh means the building of the sun; it’s the most beloved palace of Golestan Complex. 7 Qajarid King and 2 Pahlavid King have held crowning ceremony there.

We’ll walk in Tehran Grand Bazaar, enjoying the vibe of Persian traditional business. In the afternoon we’ll either drive or take a bus to Kashan. 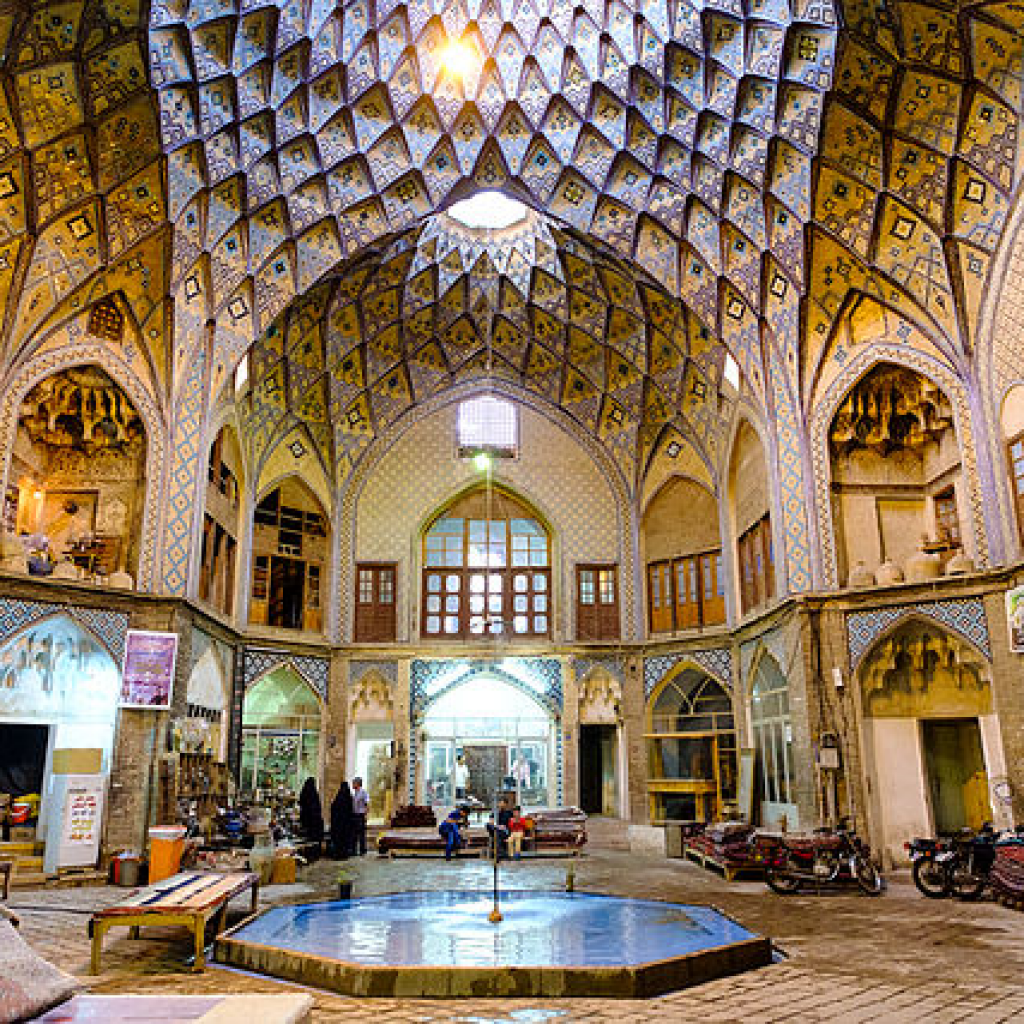 Today we’ll start our day visiting Boroujerdi and Tabatabaei houses, remained from Qajar Era. The houses of Kashan seems to be so simple from outside, but once you get in there, you’ll find yourself in splendid rooms with so much artistic ornaments.

After lunch we’ll go to Fin Garden, a saffavid garden which is entitled in UNESCO world heritage Persian gardens. After that walking in Kashan’s Bazaar. In the bazaar, we’ll visit the Amin o doleh Timche, a small caravanserai with a very eye catching tiles and splendid architecture. 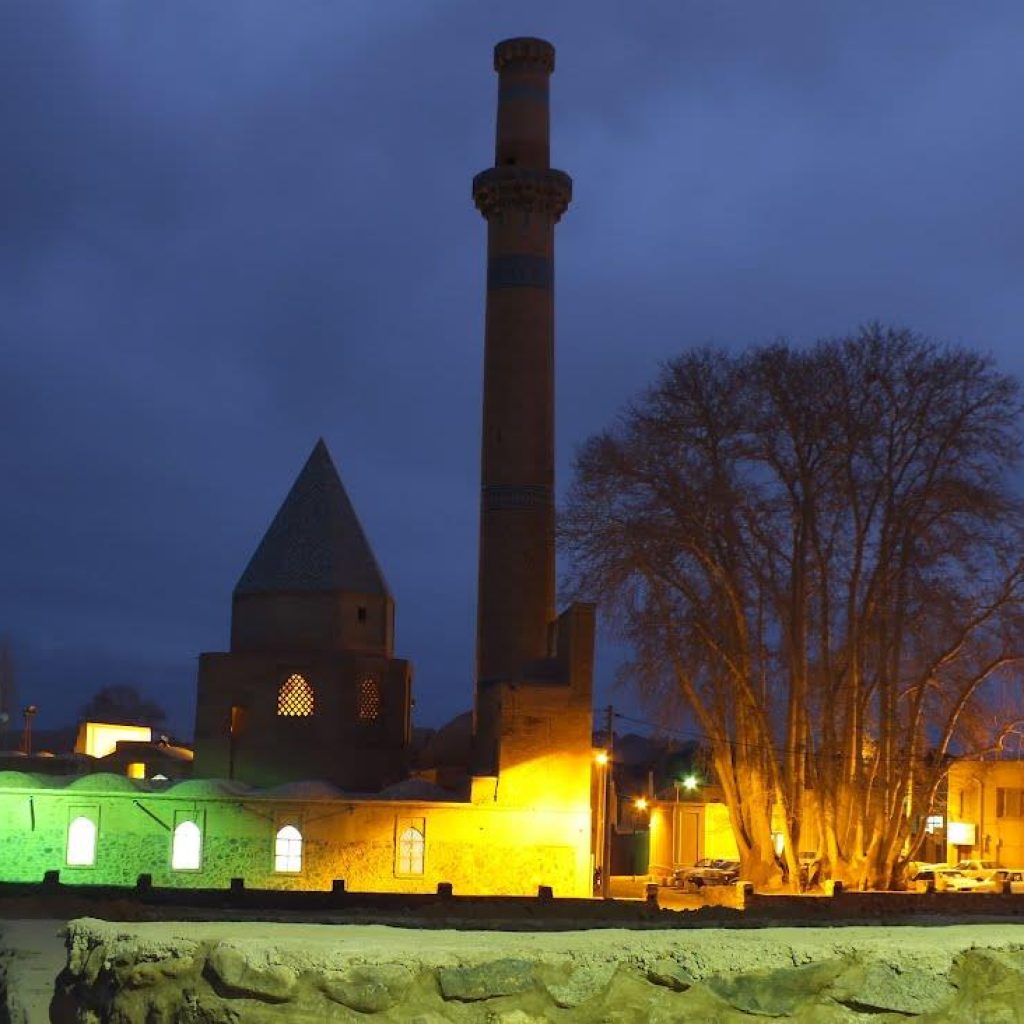 Breakfast, drive to Isfahan. On the way we’ll go to Natanz, and we’ll have a quick stop at the Jameh mosque and Sufi Sheikh Abad al Samad. Then keep drive to Isfahan, in Isfahan visiting the Aquarium. This Aquarium is 4000 meter vast and is home to 300 kinds of Fishes and 6 kinds of Sharks.
Overnight in Isfahan 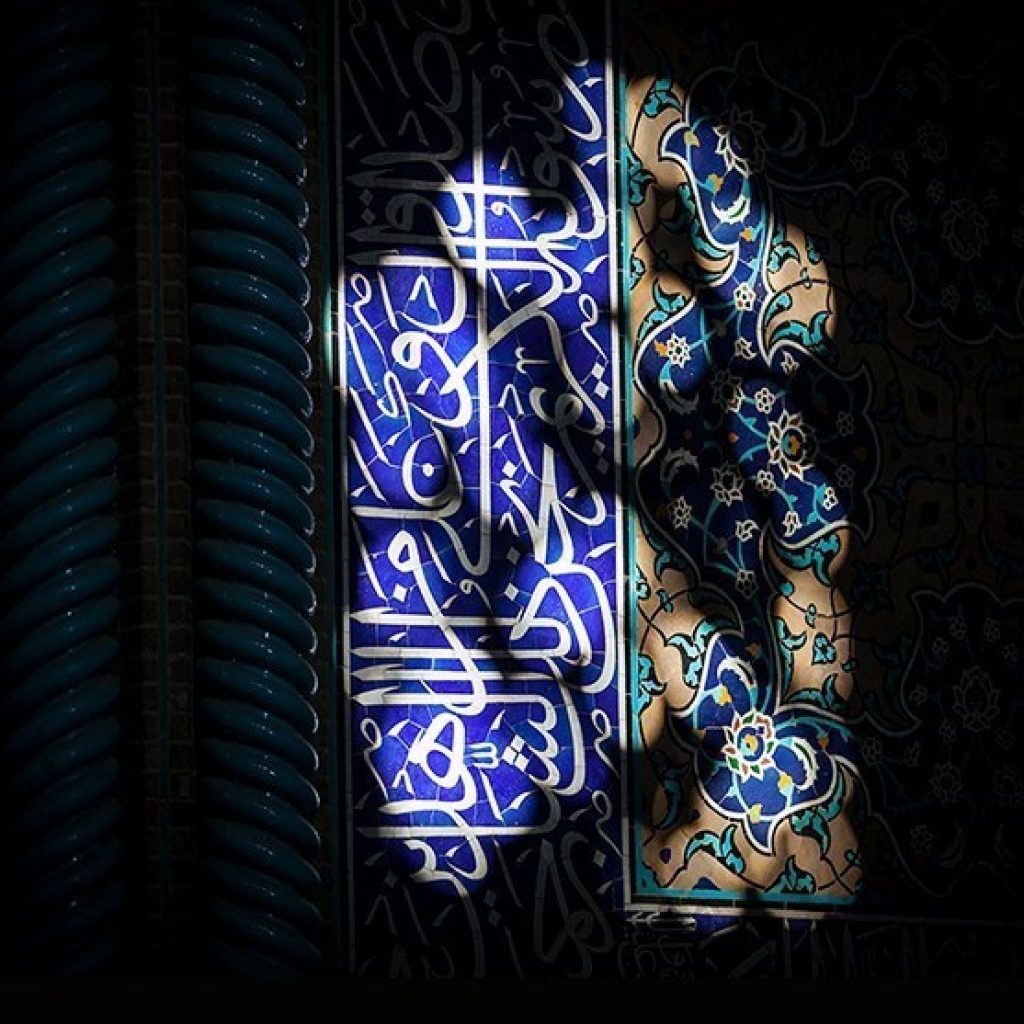 Breakfast at hotel, then let’s go to Naghshe Jahan Square and visit the blue sky joining with the blue tiles of Jameh Abbasi Mosque (Imam Mosque) This mosque was built in Saffavid Era and has fascinating architecture. After this lovely Mosque, we’ll visit another mosque in the square, the Sheikh Lotfollah mosque! This mosque was built for the women of royal family. The ornaments of its dome is a true beauty of Islamic architecture, showing the skill of the saffavid artists. Ali Qapu is the next place that we will see. This palace has a room named as Music room and the ornaments of this room is like the Persian music instruments, which reflex the sound of music in it. In the Terrace of this castle the king used to sit, rest and watch the polo game in the square.

We will also visit Qeisarieh Bazaar, there we will be familiar with Iranian art and handicrafts, maybe buy some Gaz, the famous sweet of Isfahan.

Chehel Sotoon palace is really close to Naghshe Jahan Square. We’ll go there to visit this attractive palace with its lovely painting. Each wall has its own painting and its own story. 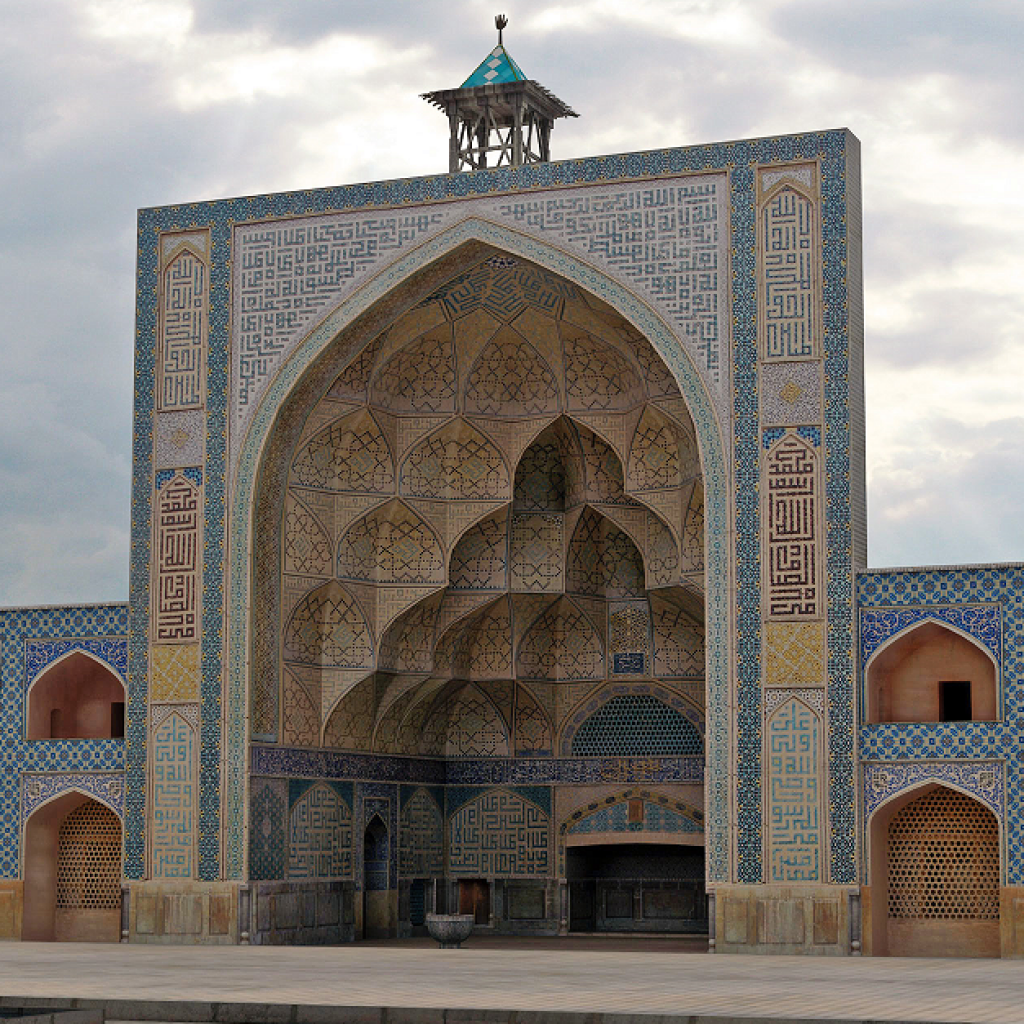 Today we’ll walk in the residential area of Armenians in Isfahan, the area is called Jolfa. In Jolfa region we’ll visit the Vank Cathedral, the most famous church of Isfahan. The painting inside this Church is truly eye catching. In the museum, you can see a single hair with an Armenian sentence on it. We will also go to Isfahan Music Museum, there we can hear the traditional music of Iran. In Jolfa we have time to walk and explore it’s cosy shops, that reminds us the Azeri shops of Azerbaijan.

Visiting Isfahan Jameh mosque. This mosque was built by 4 different era and is the first mosque with 4 courtyards.

In the night we’ll walk next to Zayande Rood river, wondering on Sio Sepol bridge and Khaju bridge, and maybe have some coffee in the lovely coffee shop on the Khaju bridge, called Café Farhang. 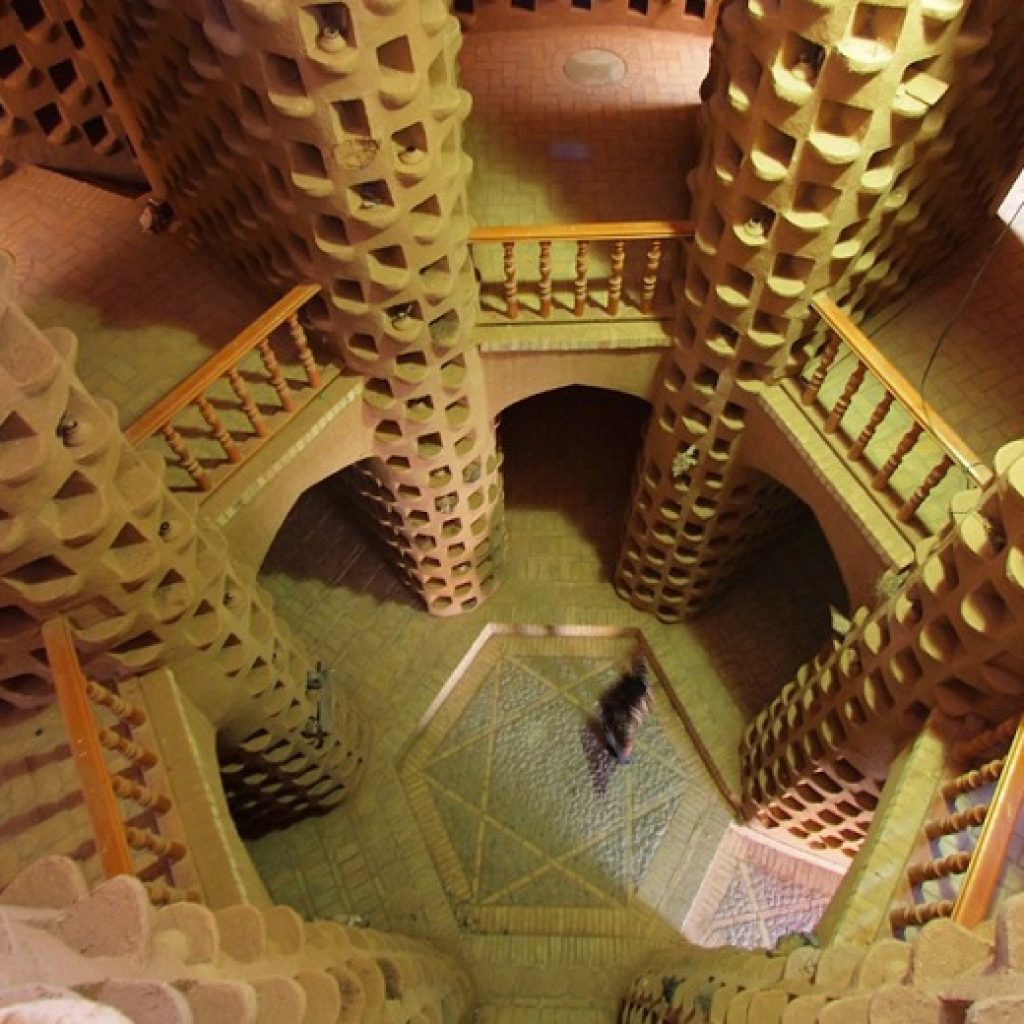 Leaving Isfahan toward Yazd, on the way we’ll visit Naein Jameh mosque. The first mosque of Iran. The Narin Castle of Meybod and the Pigeonhouse. We can also stop to see Zarch Qanat the longest cistern of Yazd.

Arriving at Yazd! The historical city is a world heritage site! So make yourself at home!

Starting our tour in Yazd and visiting Amir Chakhmaq Meydoon (Square). There we can visit the Cisterns, Caravanserai, bazaar and other parts of this great complex. We’ll visit the splendid Jame mosque of Yazd and Water museum. Then we’ll walk in old part of yazd, called Fahadan. There is a mysterious joy in walking in the tiny alleys of Fahadan. 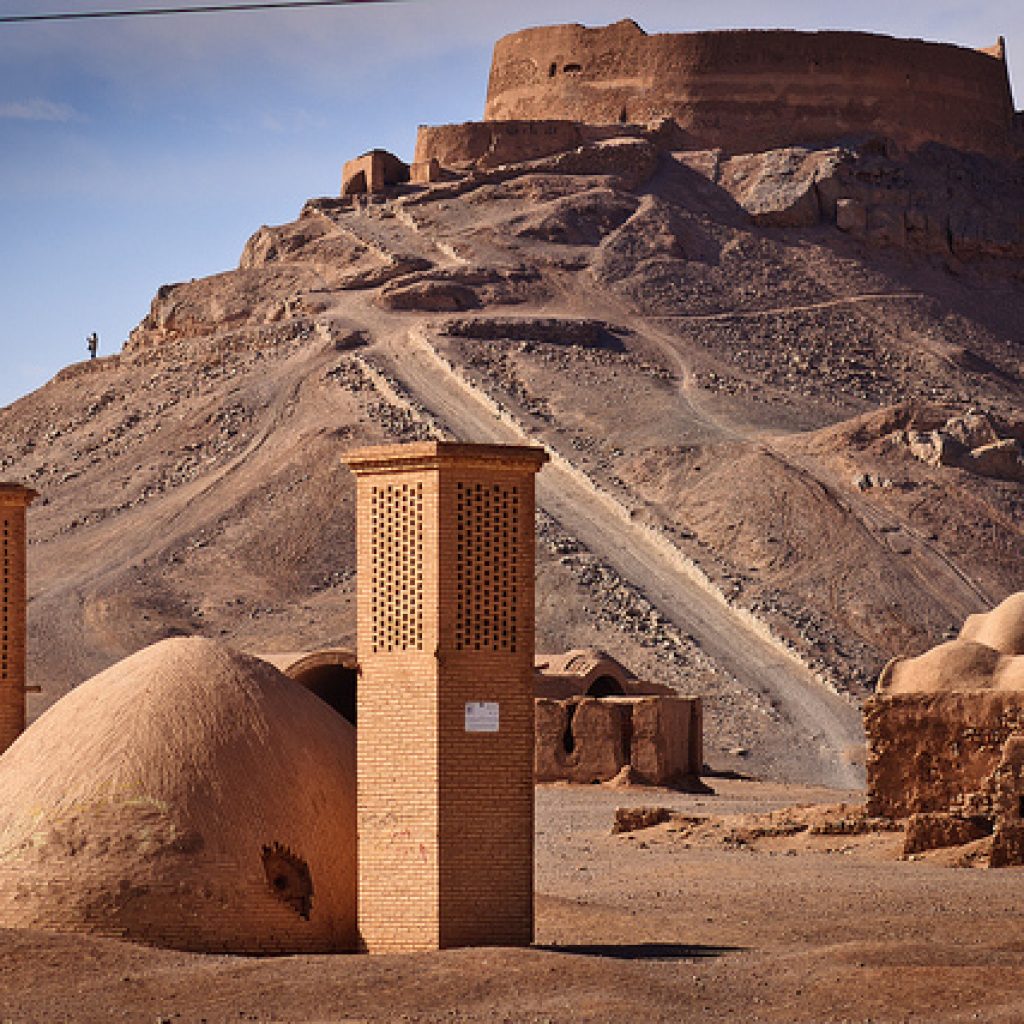 Coming back to the city center and visiting Dolat Abad Garden, a unesco world heritage Persian garden which consists of a summer house with a very tall wind catcher. 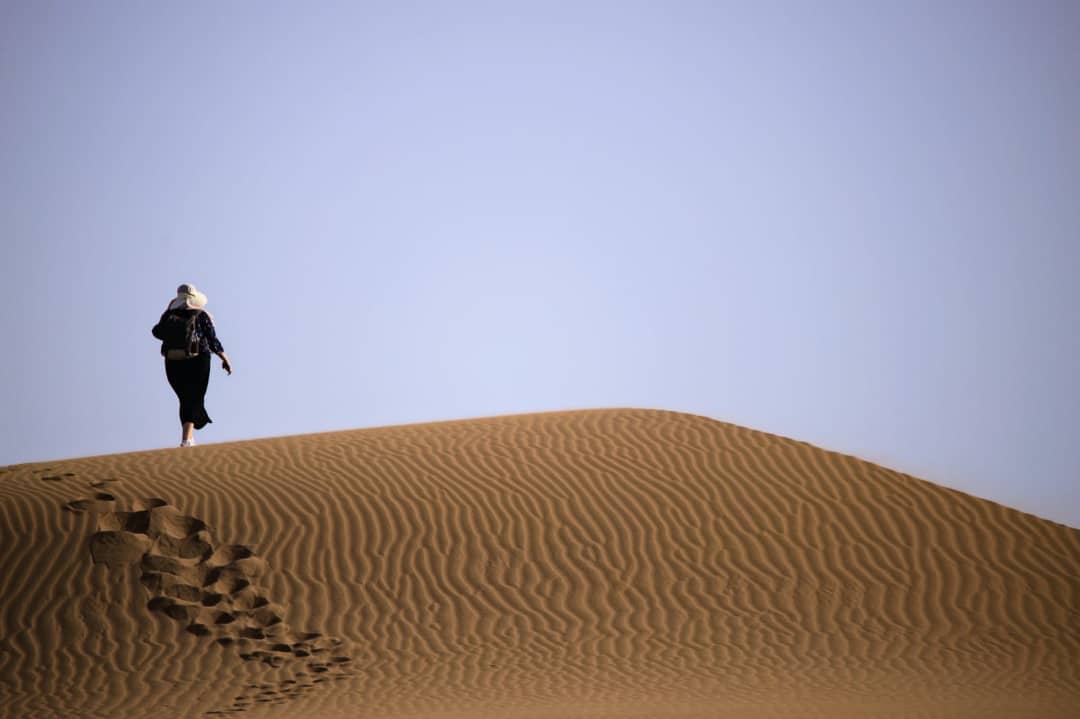 Today we leave Yazd toward the salty desert of Fahraj. In Fahraj we’ll have time to trek in the desert, maybe doing some camel riding and safari. 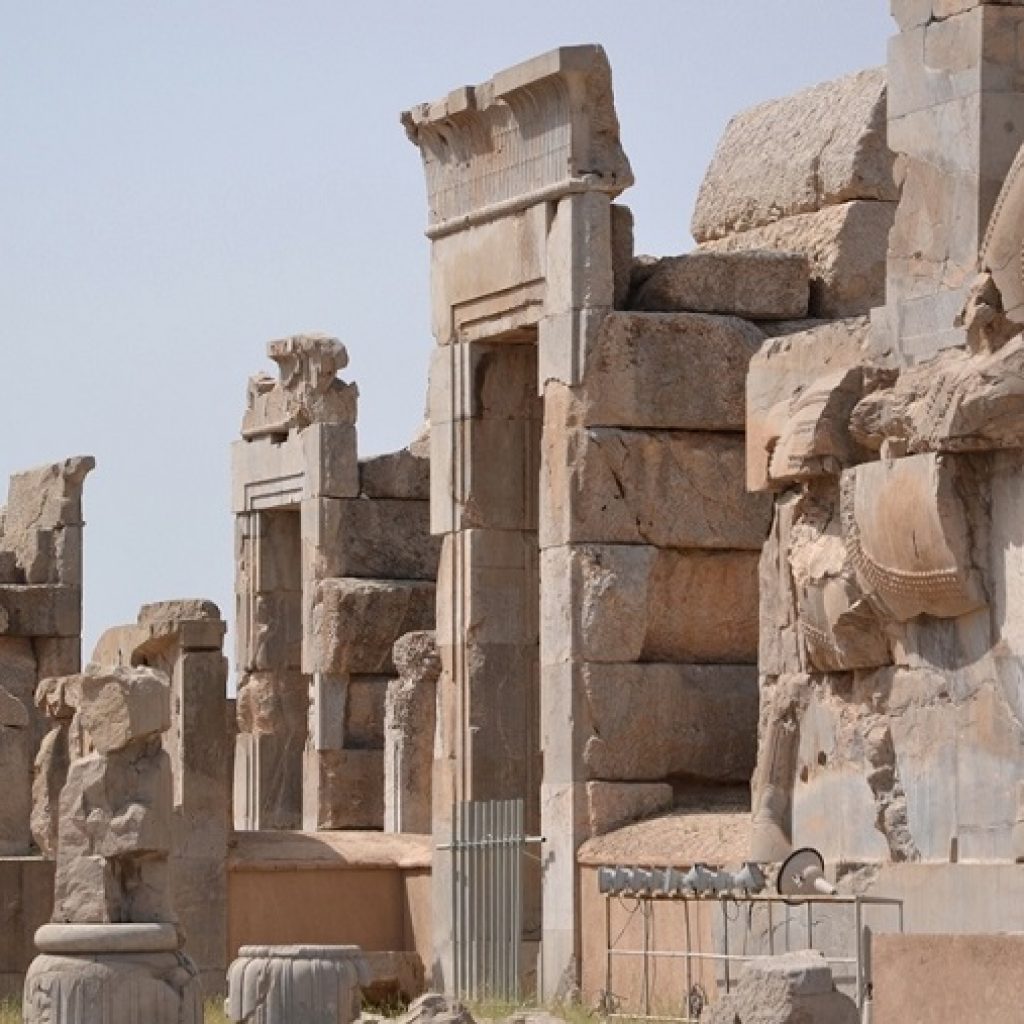 Drive to Shiraz visiting Tomb of Cyrus, in Pasargadae. Getting to know this respected king who established the first great emperor of the world. Then we’ll visit Persepolis, the complex of Achaemenid dynasty, where the people used to celebrate Norooz, the new year ceremony. The picture history of bas-reliefs in the Apadana palace still tells the story of 2500 years ago. 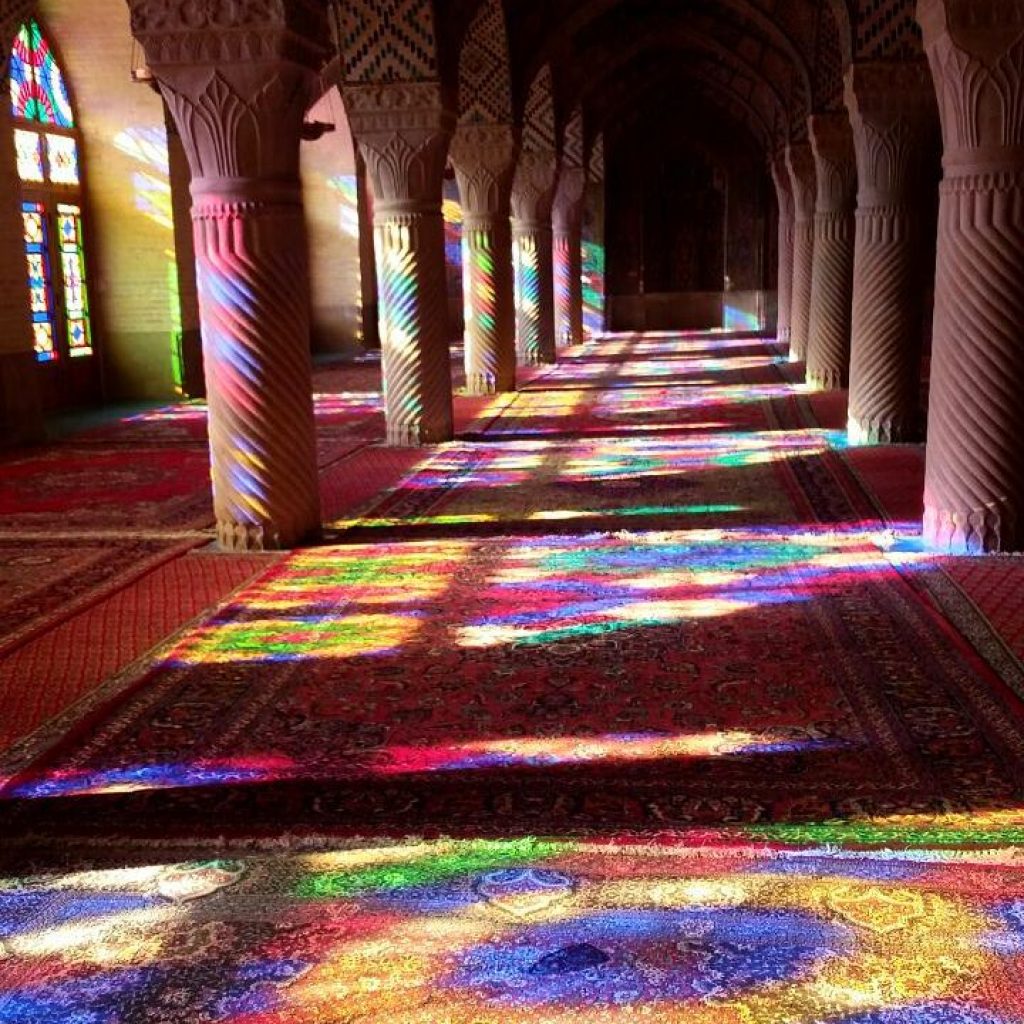 Today we explore Shiraz, starting from the most beautiful mosque of Iran! The bride of Mosques! Nasir almolk Mosque! The best time to visit this mosque is in the morning and before noon. This mosque was made in Qajar dynasty by a member of Royal family, with precious ornaments and beautiful architecture. Once you get in, you will find yourself in a garden full of roses! After that we’ll visit Qavam house and Zinatol molk house, these two Qajarid house are actually a single house! But in two parts!

Then we will visit the Vakil Bazaar and Vakil Bath. 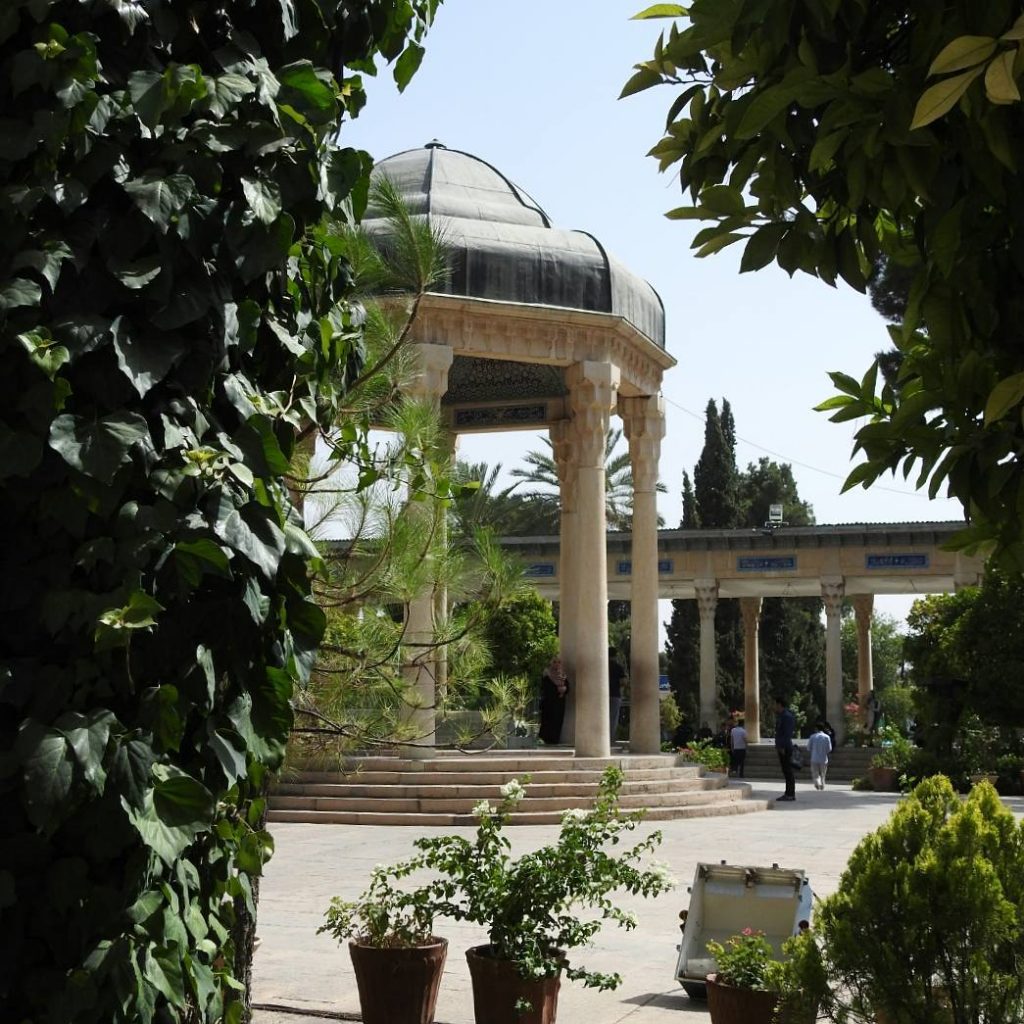 Today we’ll visit Eram Garden, this heaven is a gathering of so many kinds of planets and its a botanical type of Garden. Then we’ll visit tomb of Hafez, a poet who lived in Shiraz and dedicated his life to write mysterious poems. Goethe the famous German poet had a special respect and love for Hafez.

After a delicious lunch we’ll go to Shah Cheragh Shrine. 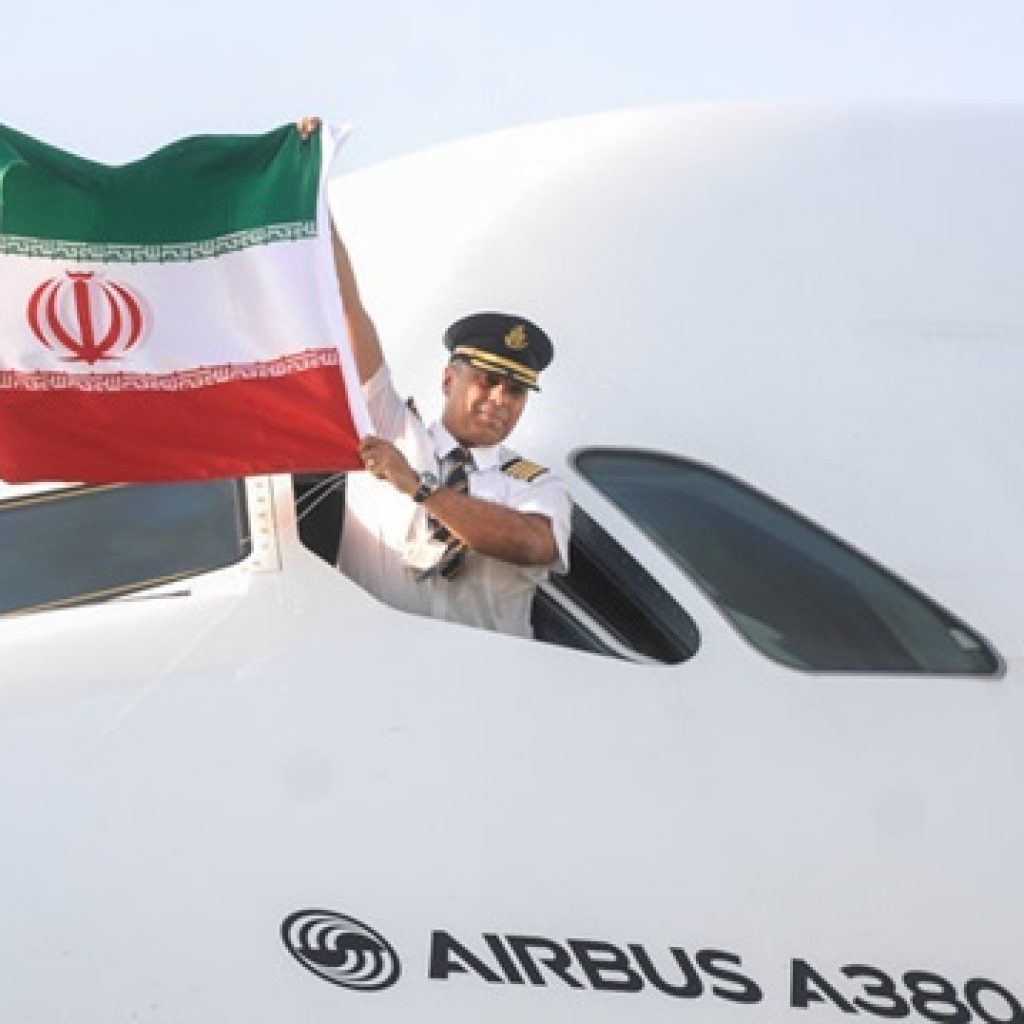 Last day! Today we leave Iran, but the memories will stay in our heart! We will keep the friendly people, tasty foods and beautiful attractions in our mind.

Fly to Tehran and transfer to International Imam Khomeini Airport for departure. 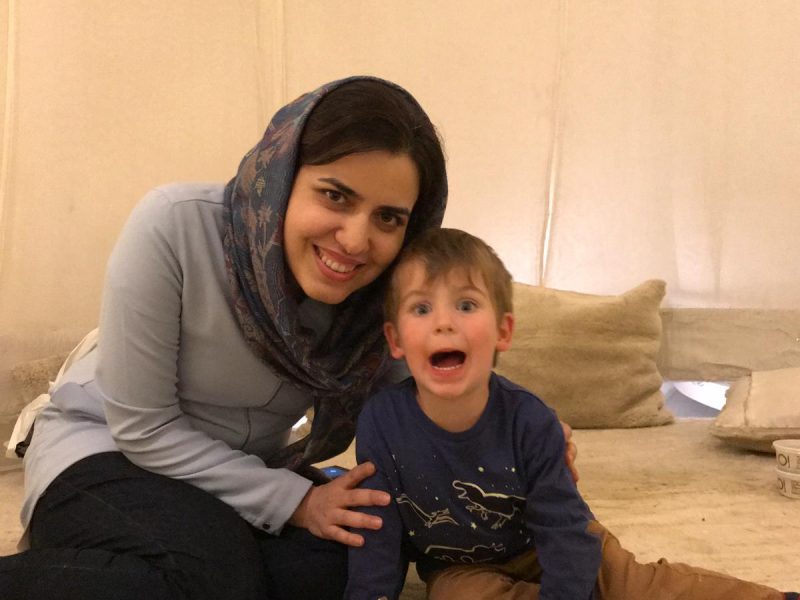 A Kid-Friendly IRAN Tour for Families 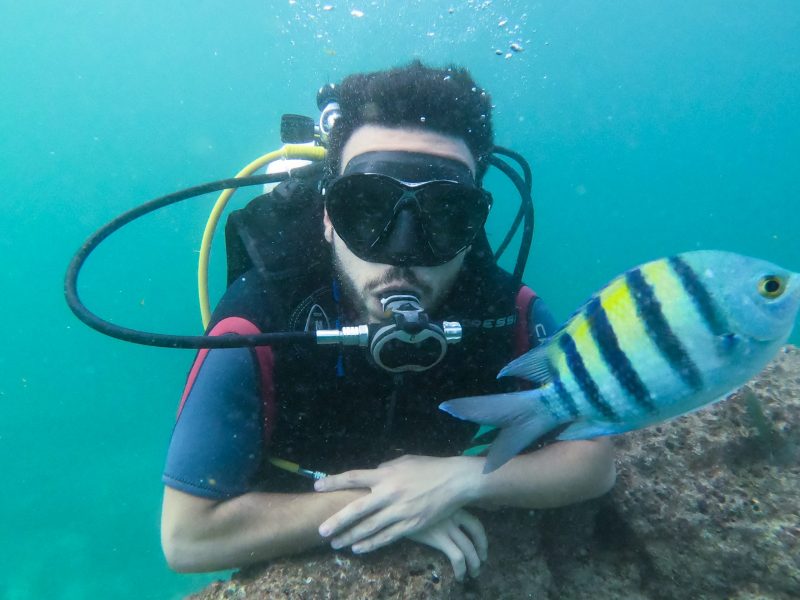 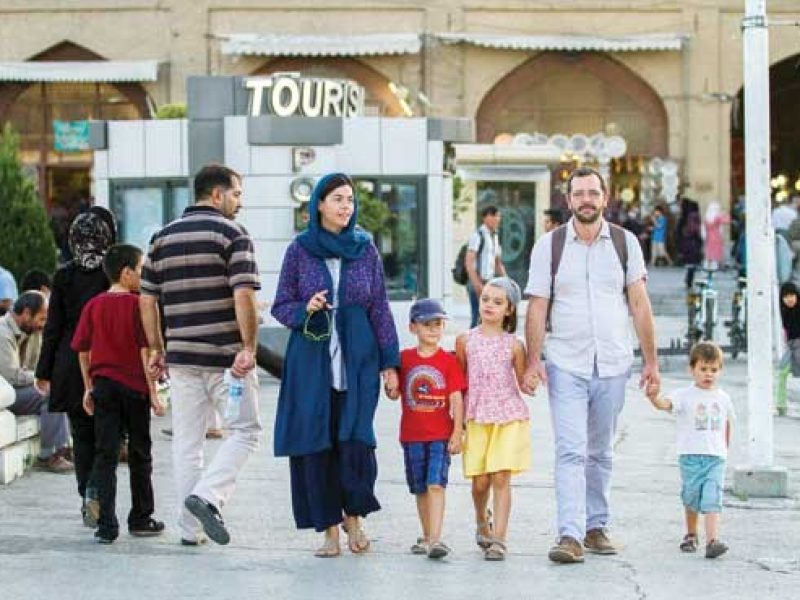 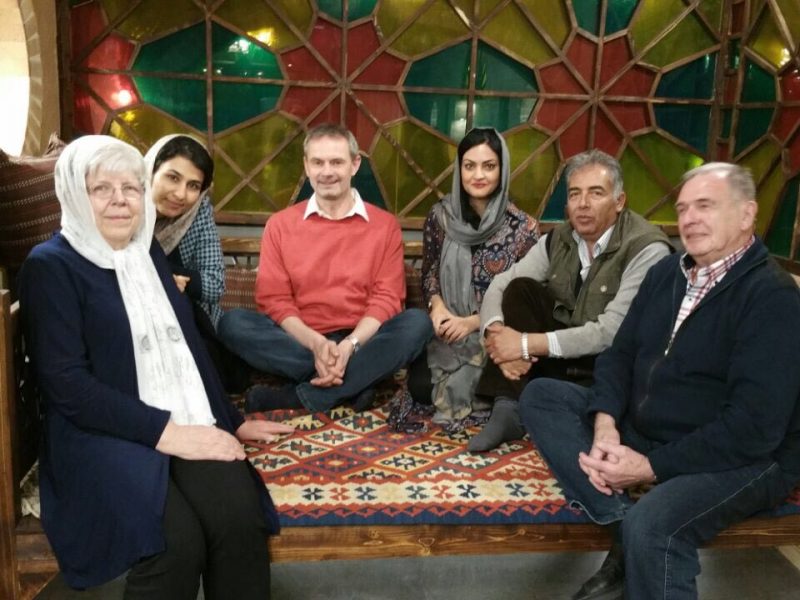 2 Weeks Travelling to Iran from Germany