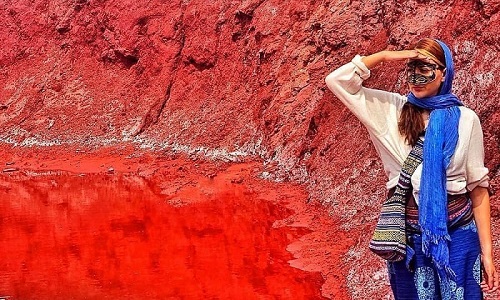 Iran, a country in constant evolution, opens its doors to tourism to proudly present its treasures, many of which have been declared a World Heritage Site by Unesco. Thousands of palaces, museums, gardens, caravanserais. The program includes visiting the main historical sites and exploring the Dasht-e-Kavir desert, considered one of the most picturesque areas in the world so that in recent times it becomes part of the trip for most tourists. Few think that Iran is also a seaside destination: with over 1,500 kilometers of unexplored coastline, the coasts of the Persian Gulf are home to a unique landscape, a culture, and, of course, wonderful islands among which two are the main ones: Kish and Qeshm. Qeshm is Visa-free, that is, it is possible to enter this island from a foreign country, without having to apply for the Iranian VISA. Only a passport is needed.

An exciting journey that starts from the ancient roots of Persian culture to get to the modernity of present-day Iran. Come with us to discover one of the most hidden places of an Iran trip: the island of Qeshm overlooking the Strait of Hormuz, rich in natural beauty. Shiraz, the city of poets and gardens, is the ideal gateway to understand this millenary culture, made up of layers and continuous artistic and cultural influences. A magical journey that takes us in the footsteps of Marco Polo, Alexander the Great, and Zoroaster and ends in the multiform and teeming capital Tehran. 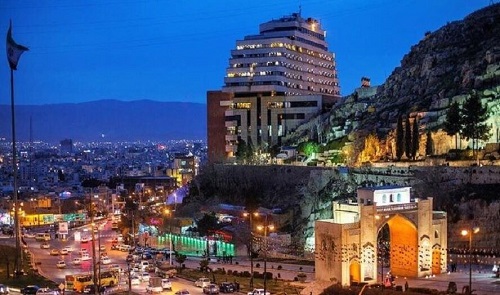 Departure for Shiraz. Arrive in Shiraz late at night, meeting with the local guide, and transfer to the hotel to rest. Shiraz is the ideal gateway for a journey to discover Iran, considered the cradle of Persian culture and one of the most important cities in the medieval Islamic world. Its inhabitants are described as "the wittiest, most ingenious and lively of all Persians", and this is reflected in the splendid gardens, the enchanting architecture of the mosques, and the busy and rich bazaars. Shiraz is also a pilgrimage destination for Iranians as it houses the tombs of its most famous poets, Hafez and Saadi. Overnight in Shiraz. 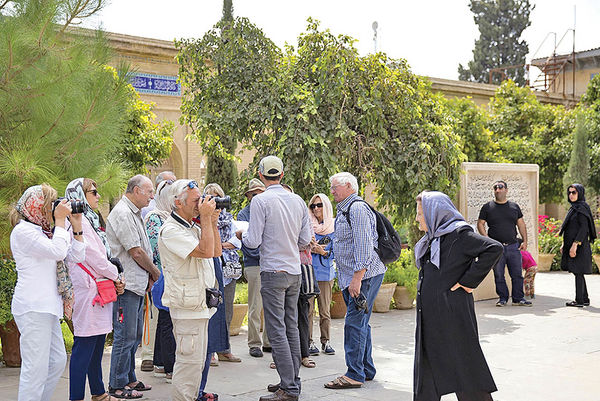 After a good breakfast, we start from the Bagh-e Eram, listed by Unesco as a World Heritage Site. We pass the Orange Garden, the Narajenstan, which houses a sumptuously decorated pavilion. We arrive at the tombs of Hafez and Sa’di, the most famous Persian poets, among flower gardens and ponds. We also visit the Nasir-al-Molk mosque, one of the most elegant and photographed mosques in the whole of Iran, and to Bazar-e-Vakil, the most beautiful and famous trading center in the country. Overnight in Shiraz. 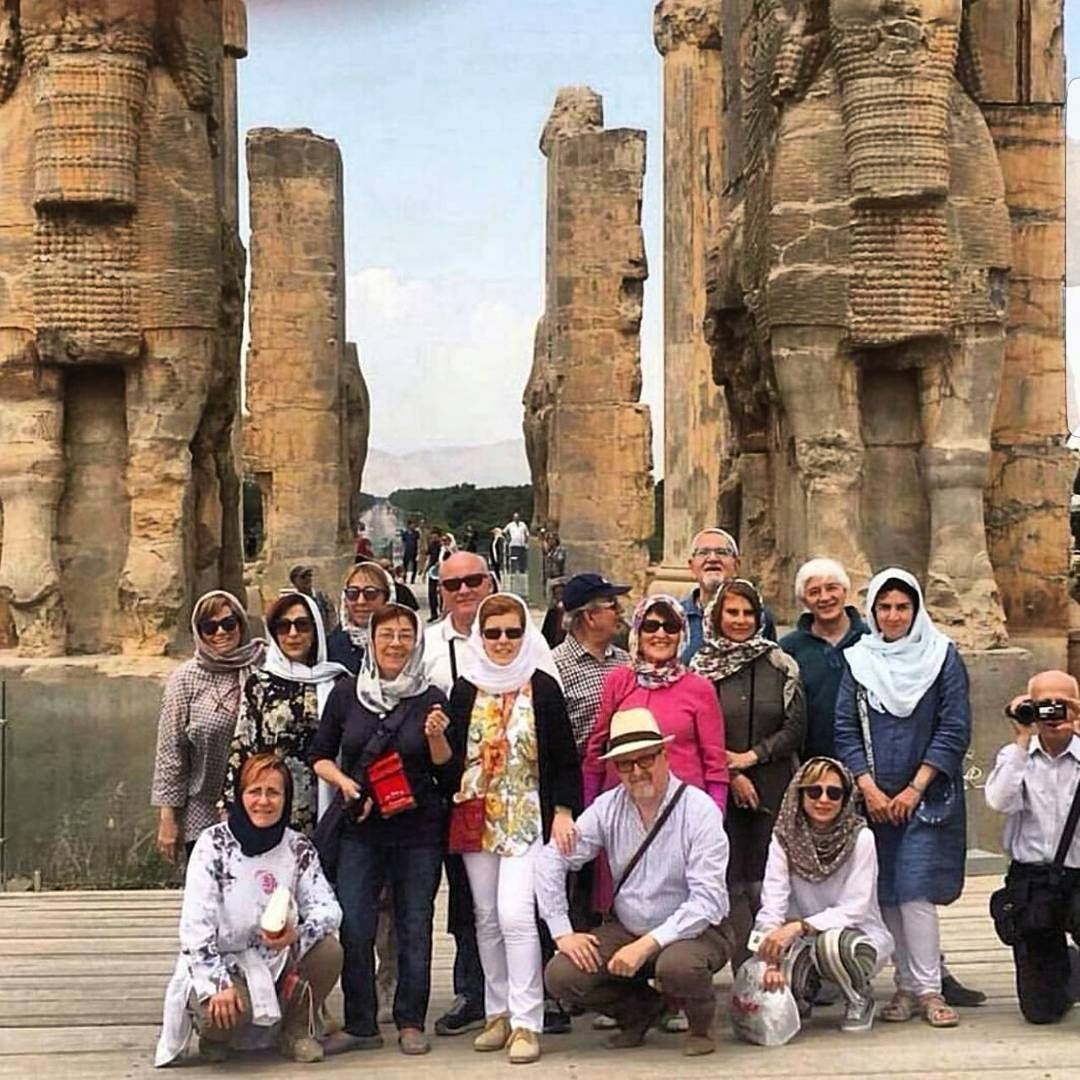 Breakfast at the hotel and departure for a full-day tour to the nearby town of Persepolis, a Unesco World Heritage Site, of one of the most powerful empires of antiquity destroyed by Alexander the Great. This large complex of royal palaces, long colonnaded avenues, rock-cut tombs, and sumptuous halls, is today an impressive archaeological site reminiscent of the great names in history. We then go to Naqsh-e-Rostam, an Achaemenid necropolis where the great kings Darius, Xerxes, and Artaxerxes rest. Return to Shiraz and visit the Shah Cheragh mausoleum. The mosque is famous for its mirrored glass mosaics which fascinate all visitors. Overnight in Shiraz.

In the morning transfer to Shiraz airport for an internal flight to the wonderful island of Qeshm and do a short panoramic tour of the town. Overnight in Qeshm. 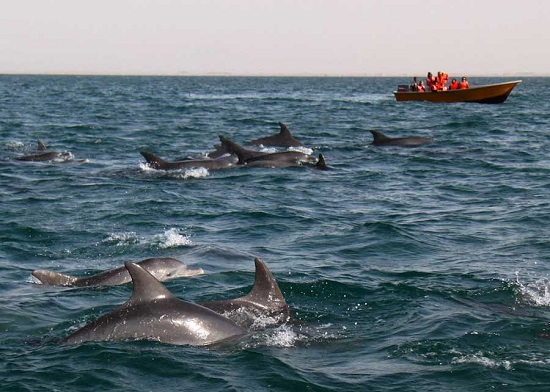 Today we will visit the exciting attractions of Qeshm, some of which are unique and not found anywhere else in the world. Hiring a boat and go to visit Hengam Island where you can spot dolphins and sea turtles, and Naz islands. Then continues with the mangrove forests of Hara, where trees are rooted in sea saltwater. Overnight in Qeshm. 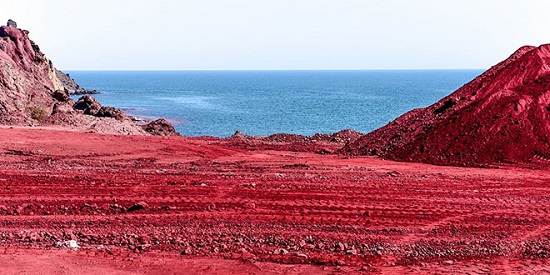 Hormuz is one of the beautiful islands of the Persian Gulf. Hormuz Island is also known as “ Rainbow Island ” due to the incredible colors of red sand throughout the island which seem to tint the sea and are determined by the minerals present in the soil. A true paradise for geologists and naturalists. Overnight in Qeshm. 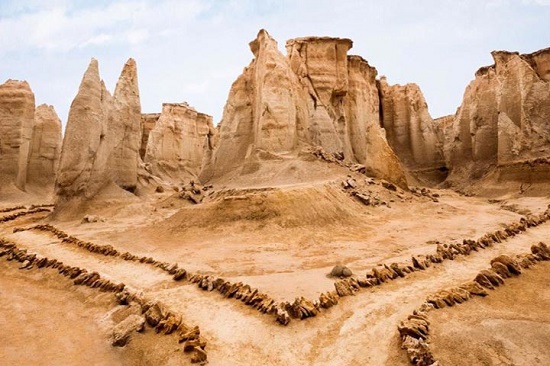 Today we leave Qeshm to go to Bandar Abbas but before that, we will visit the valley of stars, 2 million years old, shaped by the erosion of atmospheric agents. The inhabitants believe that a huge star has fallen here which burned the ground and generated the original formations that can be seen. Go to Bandar Abbas by ferry. Overnight in Bandar Abbas. 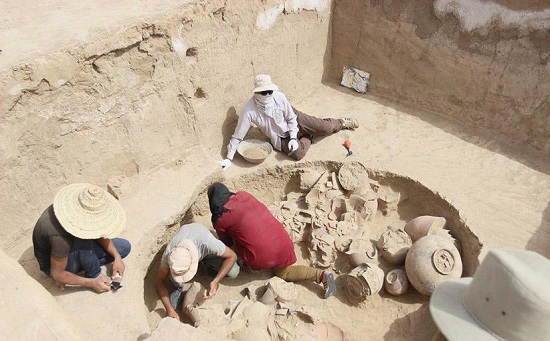 In the morning drive toward Jiroft. We will visit konar sandal site and museum. Overnight in Bam. 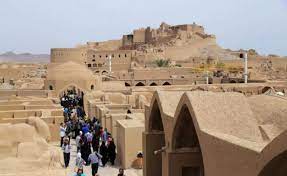 In the morning depart for Kerman but first visit Bam, citadel entirely in raw earth, now reconstruction after the earthquake of December 2003. If we have time we stop at Mahan and visit Shazdeh Garden, a pleasant green oasis, as well as a typical example of a Persian garden with fountains, a monumental entrance, and a residential pavilion. The tour continues with the Shrine of Shah Nematollah Vali, a historical complex that contains the mausoleum of Shah Nematollah Vali, a renowned Iranian mystic and poet. Immersed in a delightful garden that evokes great harmony, the complex was built in 1436 and then embellished and enlarged by Shah Abbas. Arrival in Kerman. Overnight in Kerman. 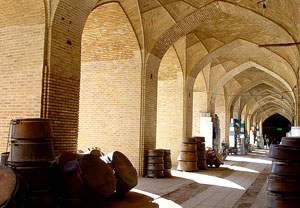 After breakfast, visit the historical center of the Kerman: Ghangiali`-Khan Complex which dates back to the XVII century. This complex includes the Jame mosque, the Hammam which today is used as a museum, a madrassa, and a Caravanserai. Overnight in Kerman. 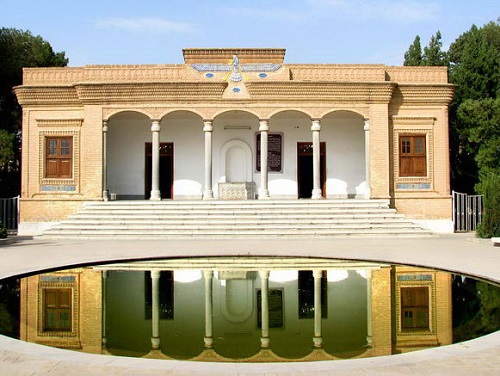 This morning, after breakfast, departure for Yazd which is located 280 kilometers southeast of Isfahan. Yazd is one of the oldest cities in the world and features several mosques of extraordinary beauty. The city tour includes a visit to the Zoroastrian Fire Temple, a temple that keeps the perpetual fire alive. Walk in the Fahadan district, the historic center of Yazd which is protected by UNESCO as a World Heritage Site. Dinner and overnight in Yazd. 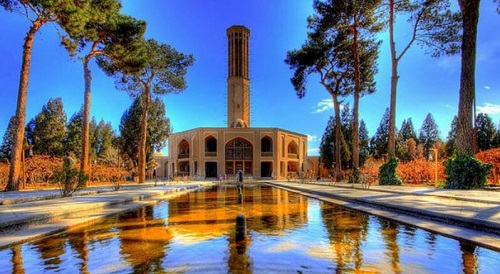 You will then have the opportunity to explore the Jameh Mosque of Yazd, a magnificent 14th-century masterpiece. Continue with a walk-in Amir Chakhmagh square. Finally, the Dowlat Abad Garden built in 1747, the walled complex includes the tallest wind tower in the country, orchards, and fountains. Overnight in Yazd.

In the morning depart for Farahzad, on our way stop at Chak Chak village, and represents the most important destination in Iran for the followers of Zoroastrianism (there is an ancient fire temple there). The other stop of today is Kharanaq, if you have a special fascination with abandoned city, this ghost village dating back over a thousand years ago. If it had been up to me I would have spent hours and hours exploring the winding alleys and crumbling earthly houses. The most interesting things are the swinging minaret and the caravanserai on the edge of the town. In the valley below, between the green fields and the reddish hills, there is an ancient bridge in stone and an aqueduct built to irrigate the land. Arrive in Farahzad and overnight. 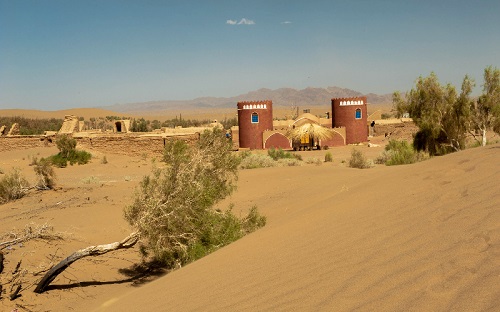 After breakfast spends a day in Fahazad, khur, and the amazing nature of the desert. There are a lot of varieties to visit (sand dunes, salt lake, salt polygons, water springs there. Overnight in Farahzad. 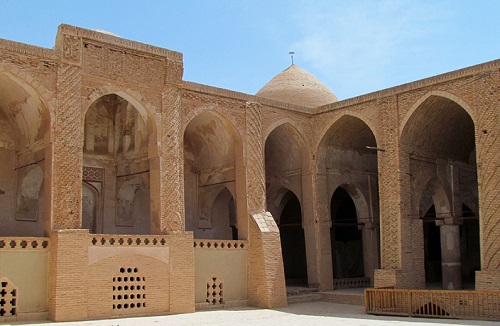 Departure for Isfahan. During the trip visit Nain village, with its characteristic bio-architecture, visit Jame` Mosque which dates back to the Seljuk period (11th century), and the old Bazaar. Arrive in Isfahan and overnight at the hotel. 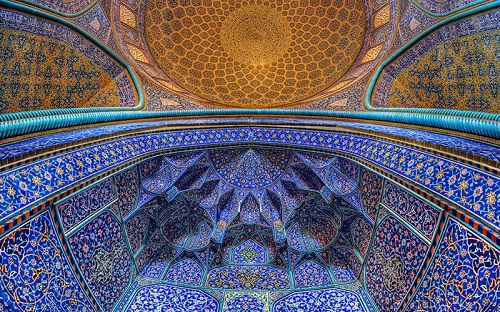 Isfahan is certainly one of the most beautiful and evocative cities in the world. This jewel is rich in culture and elegance and leaves you breathless for the beauty of its countless monuments. The visit to the capital of the Safavid dynasty starts from the grandiose Naghsh-e Jahan square, among the largest in the world, to visit the two important mosques that overlook the square itself, the Imam mosque, one of the largest mosques in the Middle East, and the marvelous Sheikh -Lotfollah, perhaps the most richly decorated in Iran, known as the "women's mosque". Also on the square, we will also visit the Ali Qapu Palace, a six-story building, which houses the famous music room. Finally, some time will be devoted to the bazaar that surrounds the entire square with its arcades. The day ends with a walk on the bank of the Zayande Roud River where it is possible to admire the architectural beauty of the two bridges that cross it: Sio-se pol (thirty-three arches), and the Khajou Bridge. Return to the hotel and overnight in Isfahan. 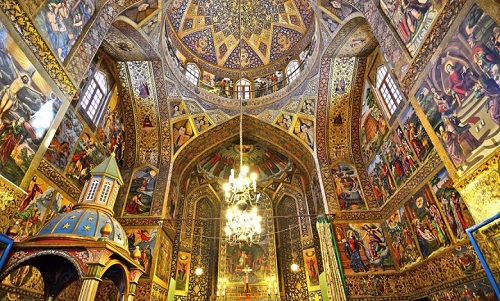 One day is not enough to get to know the beauties of Isfahan. After breakfast, we continue the visit of this city starting from Chehel Sotoun Palace, with its forty columns, commissioned by Shah Abbas I in the seventeenth century, with its wonderful gardens and large swimming pool. We then visit the garden of the Eight Paradises or Hasht Behesht. Then visit the Armenian cathedral of Vank and its museum, testimony of the 10,000 Armenian families who arrived here from the Caucasus in the early 1600s. Then you have a free time. Overnight in Isfahan. 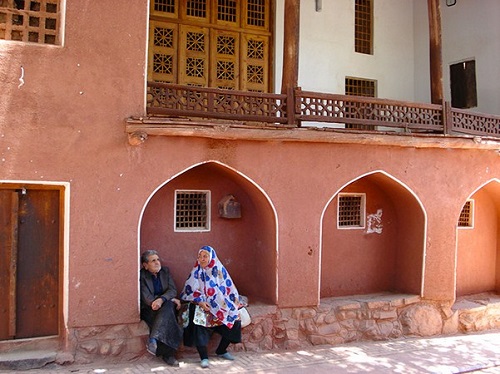 Today we resume our journey towards Kashan. On the way stop at Abyaneh, an ancient mountain village of ocher-colored houses made of clayey earth bricks. Here the women still wear colorful local clothes, of an ancient tradition. We then reach Kashan, a city built from a large oasis in the desert world-famous for the Kashi, glazed ceramic tiles that have been widespread since the twelfth century. In Kashan, we visit the garden of Fin, one of the most famous gardens in Iran, built to recreate the classic Persian version of paradise on earth. We will also see the historic house of Broujerdiha, once the residence of merchants. Overnight in Kashan. 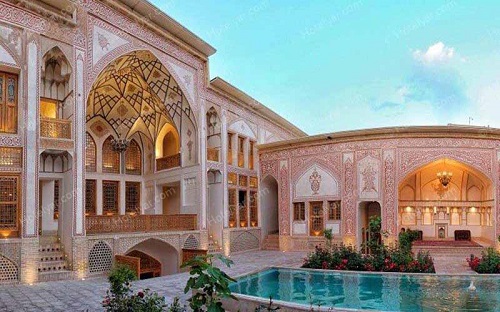 After breakfast we continue the visit of Kashan: we visit the historic house of Tabatabaiha, former residence of merchants, and the mosque of Agha Bozorg, dating back to 1700 and unique of its kind. Our tour ends with a visit to the traditional Bazaar of Kashan. We then leave this city for Tehran where we stay overnight. 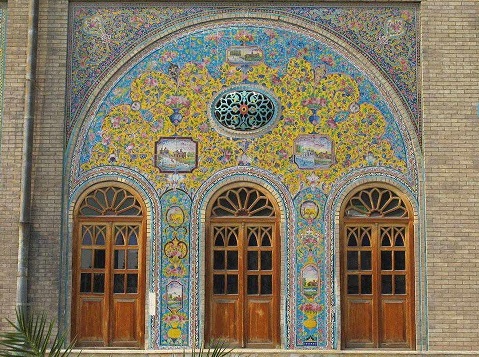 Upon awakening, we begin to get to know this teeming modern capital together, located at 1,100 meters above sea level under the very high slopes of Mount Damavand. We visit the Golestan Palace, a historic residence of the Qajar royal dynasty and today the oldest monument in the capital, protected by Unesco. We continue with the visit of the Archaeological Museum, the most important in the country, with finds that tell the ancient history of the most important settlements that have marked the development of Iranian civilizations. We continue with the National Jewelry Museum, which houses one of the most important collections in the world, accumulated over the centuries by all the Persian dynasties. We spend the last night of our wonderful trip to Tehran. If you need a hotel we can book it for you. Then transfer to the IKA airport on the base of your return flight. 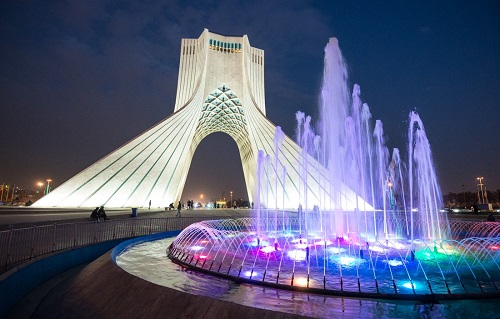 Early in the morning, return to your homeland.