You probably have almost always visited mall centers with modern facilities and architecture in order to purchase your requirements. However, you may find it interesting to buy from shopping centers which have maintained their traditional architecture and their traditional local stuff. The idea of making places in which all human being requirements or needs are available (by which so much time is saved) requires some extra attractions which have been noticed by traditional Iranian architectures. No matter where your destination is, and which city you are traveling to, while you are in Iran, you will see traditional bazaars built in a linear straight line. Within these bazaars, there are several small stores which are called “Hojre”.Hojre provides stuff for sale like other types of stores. The first floor includes types of Hojre that are mostly stores or workshops. Bazaars that are of more than two floors allocate the upper floors to different sorts of offices. Hojres are designed in a form that situates them fifty or seventy centimeters higher from the surface of the ground. The reason for this type of design is for the customers to see inside of the stores better, besides, through such a design the appropriate distance between customers and salespeople are maintained by the counter.
Most of the bazaars have mosques, public bathrooms, and cafes close to themselves in addition to shopping centers. Such sections help all the economical and social aspects of the area to survive. Nowadays, big and famous shopping centers have followed this formation strategy based on the needs and the culture of their country. The existence of beautiful arcs, roofs, windows, pleasant smell of plants, condiments, the most traditional Iranian cotton, and copper dishes, make your plan and spend your time visiting these places on your trip. 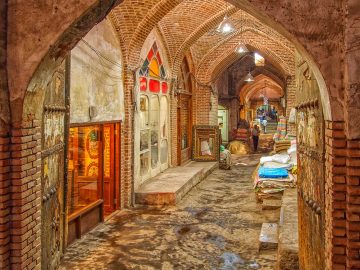 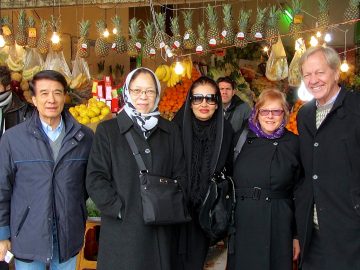 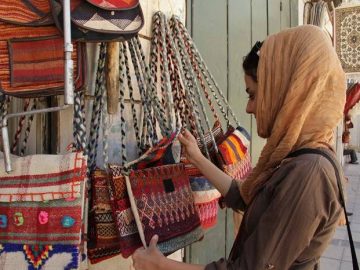 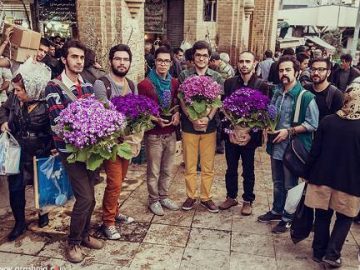 Here we introduce you to some of the most prominent bazaars in Iran:

Vakil Bazaar, in Shiraz: This bazaar is considered as one of the oldest and most traditional bazaars in Iran. It is located in the center of the city (Shiraz). A collection of traditional and historical attractive places like mosques, public baths, and castles are established in this area. This bazaar is one of the longest bazaars in Iran to which you are attracted after seeing its traditional architecture. In the past, it was considered as the heart of Shiraz economics, while these days it is a bazaar that sells special stuff and is of high value as one of the attractive touristic places in Shiraz. Nearly all sections of it are specialized for selling an especial sort of good. Like other shopping centers all around the world, this bazaar contains draperies, crystal shops, crafts like Iranian Khatam, jewelry, and etc. therefore, if you are interested in such stuff, do not lose the chance of visiting Saraye Moshir in this bazaar. You can try some of the most famous Iranian, or it’s better to say Shirazian sweet, (Falude and Bastani) in Vakil Bazaar. Another attractive place which is located close to Vakil Bazaar is the ancient Khan School. If you are interested in Iranian nonalcoholic drinks, you can buy them with the best quality in this collection. From the south extreme of the bazaar, we will reach another bazaar which is called Saraye Moshir. Not only this bazaar provides you good souvenirs, but you will also be attracted by the Iranian traditional architecture of its structure. In the middle of this bazaar (Sarayr moshir) there is a beautiful rectangular pool next to which you can have a break and take pictures.

Naghshe Jahan Bazar, in Isfahan: This bazaar is made up of two floors in which there are two hundred Hojres. These hojres are located around the Naghshe Jahan Square, and the stuff that they provide are Iranian handmade crafts. This bazaar is known as one of the biggest bazaars in the world. It has been registered in UNESCO universal inheritance system. This bazaar is contained of four incredibly attractive constructions: Sheikh Lotfolah Mosque, Emam Mosque, Alighapu Castle, and the entrance of Ghesarie Bazaar. you need to have at least a whole day free to visit this bazaar completely. Moreover, this bazaar is the heart of handmade crafts and the original art of Iranian artists. Perhaps one of the attractions of this bazaar is that you can see artists working in the workshops of the bazaar in person. Arts like khatam Kari, Monabat Kari, carpet making, cotton printing, and Vitreous enamel are among numerous arts that are common in this bazaar. You can buy souvenirs from this bazaar in order to keep sight of Iranian original art and architecture. Visiting this bazaar has inspired so many authors to write memories about it.

Great Bazaar of Tabriz: Tabriz Bazaar having a 1 square kilometers area is one of the biggest top-moving Bazaars in Iran and the whole world. It has been registered in UNESCO universal inheritance system as the first bazaar in the world. In the past, it has been in the Silk Way and was considered as one of the economic hot spots in the universe. You can see Iranian art and manmade crafts in this bazaar and others like crystal selling bazaars, shoemakers’ bazaars, and carpet makers’ bazaars. Being one of the most beautiful great bazaars, it has been known for its chain structure and winding alleys. The old age of this bazaar resembles Iranians’ commercial experience from a long time ago. If you are interested in Iranian rugs, you may see the best samples of Iranian rugs with variety in color in this bazaar.

Kashan Bazaar: This Bazaar has been famous since old times because of its amazing architectural organization, and spacing strategies that have been utilized in it. Meanwhile, this bazaar is another sample proof for Iranian arts like coppersmiths’ art which is one of the most common arts in this bazaar. If you are traveling to Iran, make sure that you visit this city while you are traveling on the Isfahan-Tehran road. Further than visiting historical and architectural monuments, try to visit and settle in the traditional houses of these bazaars. 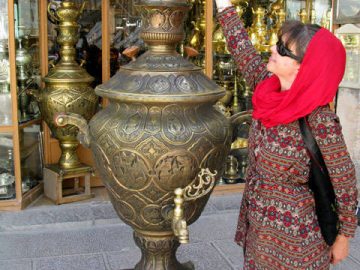 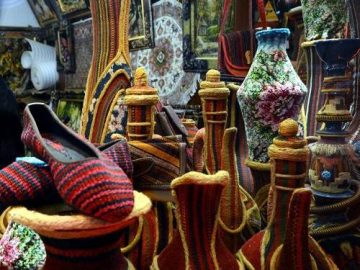 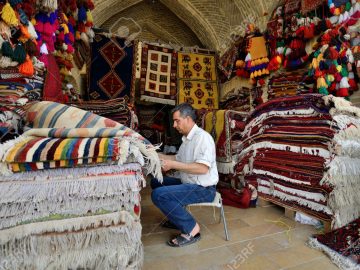 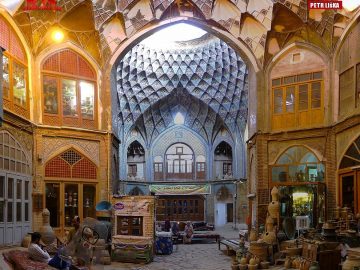 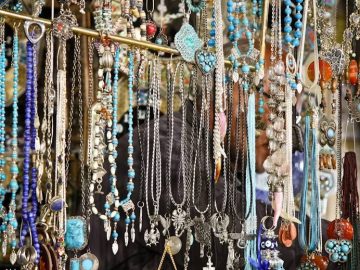 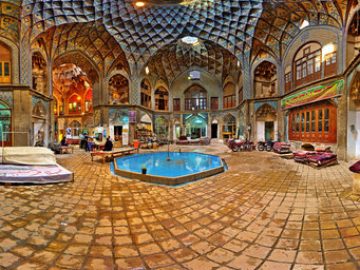 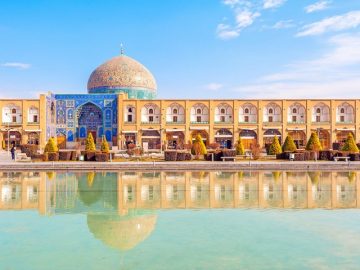